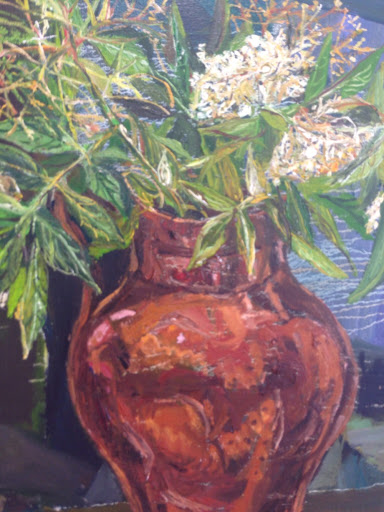 An edited version (sabotaging the Herrick allusion) of this review appeared in the Sunday Times Culture magazine on 30 July 2017.


The title of Nick Miller’s impressive and expressive new show in Skibbereen can be translated as “still life”. However, the French term “nature morte” carries a resonance confirming that mortality is the issue here. The paintings were inspired by a long-term creative project at Sligo’s North West Hospice and by his mother’s terminal illness. He used a selection of her vases and other vessels to add a personal dimension to the universal truth implicit in the work. The flowers are on the turn, some petals strewn around the bases, but we still see the glory of what they were. They present to us intimations of mortality and a poignant reminder of the transitory beauty of this world. The varities chosen represent the changing of the seasons: the hazel, the honeysuckle, the blackthorn and the fair daffodils that haste away so soon. The paintings have an energy and immediacy that come from being painted at one sitting. The artist is determined to seize the time – tomorrow may be too late.