Emil Nolde at the NGI 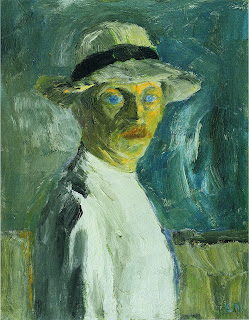 An edited version of this profile appeared in the Sunday Times Culture magazine on 25 February 2018.

Emil Nolde loved the Nazis but this love was unrequited. Heinrich Heydrich described him as “the notorious art Bolshevik and leader of degenerate art”, and over 1,000 of his works were confiscated by the regime. This was the same Nolde who asserted: “I have always and continually stood up for the National Socialist cause with the fullest conviction at home and abroad”. One of the most poignant and ironic scenes from his life shows the once-feted artist furtively painting small water colours in isolated corners of his house in Seebüll, Northern Germany. The Nazis had issued a Malverbot forbidding him from working and he had to follow his vocation surreptitiously between 1942 and 1945. The 1,300 or so watercolours from this period are referred to as his ‘unpainted pictures’. They are small expressions of bigger ambitions. Many formed the basis of larger oils that he painted after 1946 when the Nazi storm had passed. While we can sympathize with the constrained artist, we are also aware that he escaped the fate of Jewish contemporaries of his such as Charlotte Salomon and Felix Nussbaum, both of whom died in the gas chambers.

The Emil Nolde exhibition consisting of 120 works (oils, water colours and prints) is a major coup for Sean Rainbird and his team at the National Gallery of Ireland (NGI). It keeps up the momentum established since its reopening by two very successful shows featuring Caravaggio and Vermeer. However, in scale and career-covering comprehensiveness it surpasses both these earlier shows. Nolde is a significant figure in art history being one of the key 20th century Expressionists. After a late start, he had a long career, and despite his erstwhile affiliations lived to enjoy the spoils of his success. The West German Government awarded him its highest civilian honour, the German Order of Merit, in 1952.

The title of the exhibition, Colour is Life, is apt. The vibrancy and beauty of his images, especially his flower paintings, are evidence of how besotted he was with colour. In his autobiography he declared that “colour is strength, strength is life”. This is not the timid colour of costive hothouse flowers but the wild and vibrant reds, yellows and shimmering blues that he encountered in the South Sea Islands and in the enormous skies and windswept marshlands of his homeland in Northern Germany – between the turbulent North Sea and the more demure Baltic. Colour made his work expressive. He saw it as: “heralding happiness, passion and love, blood and death”.

Nolde was born Emil Hansen in 1867 in the village of Nolde, three miles inside the current Danish border. During his early years this area was annexed by Prussia and became part of Germany. Nolde retained an affection for both these countries but primarily for the area where he was born. So much so that when he married the Danish actress Ada Vilstrup In 1902 he changed his name from Hansen to Nolde. This dedication to his homeland, and to the Germanic notion of Heimat, goes some way to explaining his embracing of National Socialism and Hitler. In 1933 at a dinner in Heinrich Himmler’s house he declared: “the Führer was great and noble in his efforts and a man of action blessed with genius.” It does not however explain his anti-Semitism. At one stage he denounced his fellow-artist  Max Pechstein to Goebbels as a Jew. Nolde’s rows with Max Liberman and other Jews in the Berlin art establishment did nothing to ameliorate this prejudice.

Nolde came from peasant stock and started life as a wood worker – a skill he translated into some memorable woodcuts in later life. He studied carving and illustration in Flensburg and worked in furniture factories to earn a living. His travels took him to Berlin, Karlsruhe and Berlin and in 1889 he gained admittance to the School of Applied Arts in Karlsruhe. He spent a number of years afterwards taking private classes and visiting Paris where he immersed himself in the Impressionist movement. He was 31 before he began to began to work full-time as an artist and it wan’t until around 1912 that he began to achieve a degree of success. He was courted by Kirchner and became, briefly, a member of the Dresden expressionist group Die Brucke and he also exhibited with Kandinsky’s Munich-based group Der Blaue Reiter in 1912. In his autobiography Nolde acknowledged the influence of Manet, Cezanne and Van Gogh but most of all he wanted to forge a German identity for his art. “My art is German, strong, austere and profound”. Some of his earlier religious paintings hark back to Matthias Grunewald – often referred to as a proto-expressionist. There are echoes of Gruenwald’s magnificent Isenheim Altarpiece in Nolde’s 9-piece polyptych Life of Christ. Ironically this latter work was given a central position in the Nazi’s Degenerate Art exhibition of 1937. Goebbels was an early fan and at one stage hoped that German Expressionism would become the house style of the Third Reich. Hitler however had other plans. He saw all modern art as degenerate and demanded a return to the classical style. A style that Nolde, to his credit (and to which he owed his escape from post-war retribution), refused to embrace.

The 120 works in this exhibition, apart from a couple of works from the NGI’s permanent collection, come directly from the Nolde foundation in Seebüll. The work ranges across Nolde’s career embracing his visits to the South Seas, his travels in Siberia, his experiences in the cafes and nightclubs of Munich and Berlin, and rural life in Northern Germany. His tribal masks and grotesque figures denote his admiration for the Belgian artist James Ensor with whom he spent time early in his career. The exhibition is arranged thematically rather then chronologically. The themes are: Idea of Home; the Metropolis; Conflict and Ecstasy; the South Seas and the Exotic; and Sea and Garden pictures. There are so many highlights that it seems invidious to single out a few, but here goes: The dramatic woodcut Prophet with its hints of El Greco; the scarlet drama of Large Poppies (Red, Red, Red); his 1917 Self-portrait with that intense blue-eyed stare that evokes Van Gogh; and above all the dramatic skyscapes such as Light Breaking Through.

Half way through the exhibition the NGI, the will swap all works on paper for others sharing the same themes. This makes a virtue of the necessity to reduce exposure to light and preserve these delicate works. It gives the Gallery the opportunity to double the number of water colours on display and further broaden this already comprehensive survey of Nolde’s work..

When considering Nolde, Auden’s views on the separation of the artist and the work seem apt:

“Time that with this strange excuse/Pardoned Kipling and his views,/And will pardon Paul Claudel,/Pardons him for writing well.”

If we were to scrutinize the lives of many artists we would find much that is distasteful – Caravaggio and Picasso spring to mind. But we tend to regard the sublime art as somehow detached from the flawed life. The more so as time passes. Emil Nolde’s political naïveté and his anti-Semitism do not prevent us from admiring and enjoying his dramatic and timeless paintings.