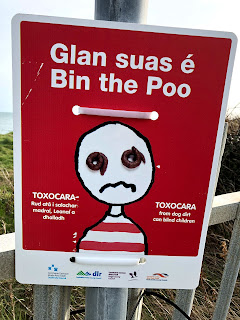 There’s been a spate of hysterical outbursts in the media lately about the mortal dangers of dog shit. Some Meath backwoods man, a councillor French, has called for drone surveillance and DNA testing to counter the imminent plague. Environment minister Denis Naughten has got in on the act describing it as “a danger to public health”. Even our ostensibly enlightened local council (DLR) have been placing melodramatic notices (see above) around Killiney suggesting that our children will be blinded unless you pick up after your pooch. The same council might do better by supplying more rubbish bins. There are whole swathes of public walking areas in the borough with no bins at all. Check, for example, the fields and football pitches around Shanganagh.

Now we’re all agreed that dog shit is disgusting and stepping on it is an aesthetic disaster and a practical nuisance. So people should pick it up, especially if it’s on a footpath or in a public area. I’m not sure it’s such a problem in the middle of a field or on a deserted beach where tide and rain will take care of it. But I daren’t say that out loud. However, to suggest that that it’s a health danger is just plain alarmist and untrue. It’s an aesthetic issue and an inconvenience. Good citizens should remove it to make the environment more pleasant for all.

You have as much chance of getting seriously sick from contact with dog shit as you have of being hit by a meteorite. The incidence of toxoplasmosis from uncooked meats is quite high but acquiring it from dogs is extremely uncommon. In the UK and the USA Toxocariasis (acquired from dog faeces), is described as “a rare disease”. It affects 0.00% of the population in the USA. We in Ireland of course don’t keep any statistics.

Anyone who has a dog knows that its favorite indoor pastime is excavating its arse with its tongue. One of its next favorite pastimes is licking its owner on the face with the self same tongue. If dog shit was as toxic as this tribe of ignorant alarmists claim we would be seeing vast numbers of dog owners walking around blind. Their pets replaced, poignantly, by seeing dogs.