Observation on the Six Nations - So Far 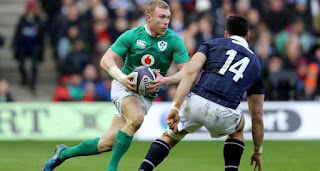 So far, so predictable except I didn’t see Scotland winning last Saturday – passion and intensity undid a complacent England. We were very poor against France and were lucky to escape. It was the first match so it must be down to getting our systems up and running. There was a singular lack of creativity that luckily was not evident in the next two matches. Earls has been the outstanding player in terms of making things happen in all three matches. This is a late flowering in a career that was more steady and efficient than brilliant up to now. Elsewhere the front five have been rock steady and the back row, especially Stander, have excelled. I think Bundee Aki is a weakish link at centre – especially defensively, and I do wish Rob Kearney would stop running aimlessly into trouble. He’s been at it for years. Centre is a problem area with Henshaw and now Chris Farrell injured and Ringrose ring-rusty.  Sexton and Murray are of course indispensable but it seems that Sexton’s old kicking malaise has resurfaced. I never liked his technique – he sets up and then turns away for a little meander before he eventually strikes. We should never have let Wales get so close. We need a dead-eye dick like Owen Farrell or Halpenny. When we play England every point will count – and I’m not sure Murray’s agricultural style is the answer.

So what next. We shall surely beat Scotland (who won’t be able to crank up the same passion in Dublin) – and I suspect that England will beat a disheveled France in Paris. If we can get a bonus point against Scotland (very do-able) we may have the championship won before the finale at Twickers. We’d be 6 points ahead unless of course England score four tries also – not impossible. The most likely scenario after round 4 is that we’ll play England with them needing a bonus point victory against us and also of course a better points difference. That could turn very nasty but somehow I can’t see Schmidt allowing that to happen. Paddy Power has us at 3/10 to win the Championship - buying money I reckon. The Grand Slam is another matter.