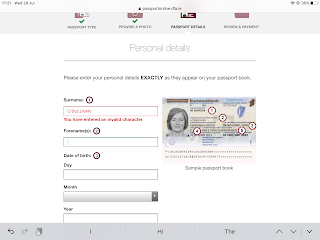 With online media setting the trends there is an increasingly blasé attitude towards spelling and grammatical usage. Anything goes: abbreviations, emojis (put me down if I ever use one) and the severe abuse of personal pronouns. A major casualty has been the use of the apostrophe - often seen now as an optional extra. A by-product of all this mayhem is that those who happen to have a surname with an apostrophe (all us O’Briens, O’Connors, O’Neills and O’Sullivans) are increasingly encountering problems when filling out forms that require a surname -  the sine qua non of most forms. The apostrophe is seen as a “special character” and renders our input invalid. So you have to omit the apostrophe to complete the form - thereby submitting a version of your name that’s inaccurate. You might imagine that Irish Government departments would recognise this requirement and program its applications accordingly. But not a bit of it. I’ve encountered it with many different departments including bizarrely the online Passport application - despite being explicitly (see image) told to enter your name as it appears on your passport. This morning I was filling out an application for an Age Card in which we are also warned that every detail must be accurate and when I had the temerity to include my surname as it appears on my birth cert with its O’ my form was declared invalid and I had to go back and delete the offending character. I expect this shit from non-Irish web sites but it’s the giddy fucking limit when our own bloody civil service can’t be arsed to build in such a simple requirement.
Posted by Ardmayle at 5:27 PM