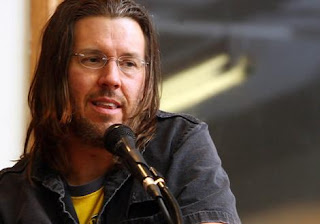 Unfinished and supposedly inferior to Wallace’s magnum opus Infinite Jest, I found it hugely entertaining. It’s really a loose assemblage of virtuoso set pieces: the annoyingly perfect Leonard Stecyk in whose face the principal wants to sink a meat hook, the riff on his pathological sweating problem that’s straight biography I suspect, and the IRS induction scene with his Iranian guide. It’s mostly set in an IRS office somewhere in middle America and there are reams of hilariously plausible arcane detail. Read it and weep for a lost talent – although page 85 may provide some clues as to why the author killed himself.

Immerse yourself in the madness of this superabundance. Drugs and excess in a tennis academy, and dark deeds in a half way house. Don’t worry about following the story, just relish the journey. The section on the cleaners in the academy (one cleans while the other gobs on the spot to be cleaned) is one of dozens of hilarious set pieces. It occasionally vanishes up its own arse with cleverness but is diverting enough to keep you hanging on.

Eleven grim vignettes by a German criminal lawyer, based on his experiences. The emphasis is on the odd, the violent and the implacable behind the bourgeois surface. Extremely gory and eminently readable. The bite sized chunks are ideal for holiday reading in the sun.

Some early rueful reflections from the prolific and entertaining Geoff Dyer. Part travelogue, part memoir, it contains his usual blend of honesty, humour, drugs and sex The chapter on Amsterdam is all too evocative of a similar experience I had with the local skunk and his piece on Libya (Leptis Magna) captures the torpor and spiritual ennui of those blighted arab countries..

The Professor by Terry Castle

Honesty and self-deprecating humour are the hallmarks of this US-based English lesbian academic. The stand out pieces are her visit to the lesbian haunted Georgia O’Keefe Museum in Santa Fe and the title piece, a painful account of an early and abusive love affair with a professor in a mid-West college. There’s also a pitch-perfect put down of that sacred monster Susan Sontag.

I was looking forward to this but I feel it was let down badly by its structure . Rather than an organized whole the book is randomly organized under theme headings such as Ways of Dying. The Vulnerable, and Destruction. This means you don’t get an overarching narrative but rather a loose collection of essays. Stodgy writing as well.

Come What May: The Autobiography by Donal Og Cusack

Shock horror, Cloyne boy comes out. Interesting that he laughs rather than abuses his old nemesis Frank Murphy – even telling a very sympathetic story about a suit-buying episode in Bangkok. An interesting glimpse into the secret world of inter-county hurling and what goes on behind the dressing room doors.

The Memory Chalet by Tony Judt

Tony Judt died in late 2010 from mortor neuron disease. This was his last work and it was dictated from his death bed. The essay Night is a chilling account of what it’s like to be trapped in this hideous condition. Grace under pressure in every word of this book – ending in a poignantly nostalgic recollection of a happy time in Switzerland.

Boyd’s latest collection of short stories. As usual he’s an entertaining and undemanding read. He gets a little experimental with his structure in a few pieces (one, Beulah Berlin A-Z, begins each paragraph with the next letter of the alphabet, another Lunch, is written in the form of a list with appropriate headings. Unnecessarily fussy I’d say.