What a Load of Rubbish 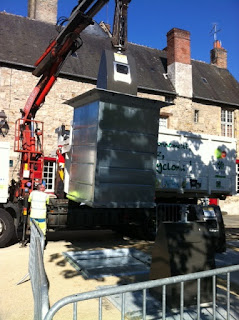 On the way from Cherbourg to Bordeaux I stop off at the charming and characterful (Chateau, Cathedral, old town etc.) town of Vitre. I stay in an eccentric little hotel which seems to be run by a retired prostitute and her poodle. In fact aspects of the hotel, large circular baths, discreet side entrance and liberal guest policy (I sat next to a Great Dane at breakafast, and many of the guests had dogs sleeping in their rooms), suggest it may have been a brothel in an earlier incarnation. But it was cheap, clean and very friendly. I was just sorry I didn't have my dogs with me.

Walking around the town later I was impressed by the cleanliness, the plentiful public toilets and the general air of a place that cares for its citizenry. Their rubbish bin operation, which I came upon in action (see image: street level bin on top of large tank being emptied), was the most impressive aspect however. All around the town were what looked like standard issue rubbish bins. However below each bin was a very large subterranean storage tank into which rubbish placed in the bin dropped. Instead of having to clear (or not) overflowing bins daily, the well organised local government had to do so once a week at most I reckon. Now Vitre is a modest town in the poorer part of Brittany (a decent two-bedroom house costs €200K). Isn't it a wonder that our well-travelled local governments aren't able to come up with a comparably elegant solution to our rubbish problems.