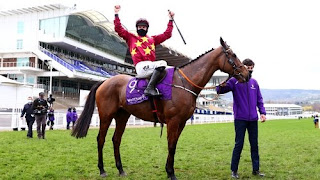 I confined my bets to two races on the final day. The Gold Cup and the final race of the meeting the Martin Pipe Conditional. I backed both A Plus Tard and Minella Indo in the Gold cup and they finished first and second - well clear of last year’s winner Al Boum Photo. Minella Indo was my fancy all year but I was discouraged by his last two runs.  I backed him anyway on the grounds that he was a better horse at Cheltenham and he obliged handsomely at 9-1. The tragic part of these bets was that I omitted to do a forecast which paid 29-1. I normally do when I back two horses in the same race but just plain forgot - it was the end of a tiring week. My other bet was Langer Dan in the last race and he finished second at 13-2. The horse that beat him, Galopin Des Champs, trained by Mullins was a Grade 1 horse lurking sneakily in a handicap. The two were well clear of the third.
Overall it was my best Cheltenham ever with nine winners and a host of bloody seconds. I made a profit on each day (albeit a small one on Day 3) and ended up with a handsome overall profit. The excruciatingly narrow defeats of Concertista in the Mare’s Hurdle and Kilcruit in the Champion Bumber cost me dearly - certainly four figures. Mullins’ stable jockey Paul Townend rode both these losers and I’m convinced that if Rachel Blackmore had been riding them they would have won. I backed five of her six winners so herself and Henry De Bromhead were the makings of my week. The highlights were the handsome win of Honeysuckle in the Champion Hurdle, the gameness of Put the Kettle On in the Champion Chase, and of course my old friend Minella Indo setting things right in the Gold Cup. An unexpected bonus was getting paid for fourth place when I backed Aspire Tower at 33-1 in the Champion Hurdle. Another unearned bonus was impulsively backing the frustrating Mrs. Milner at 12-1 following a comment by Kevin Blake on ITV. When your luck is in these things happen. But we mustn’t get complacent - the wheel keeps turning. I will bide my time now until Aintree - apart of course from a stab at the Lincoln this Saturday. I have always done well in this race going back to Monawin in 1963 at 28-1. I tipped it to my whole class at CBC and enjoyed a brief burst of popularity. We all backed it with Joe Donnelly’s (Al Boum Photo owner) father who had a betting shop across the road in MacCurtain Street.
Posted by Ardmayle at 12:57 PM